I had the privilege of going to the Berry College dedication of their new stadium, Valhalla. You remember we visited there a couple of weeks ago and I showed some progress photos. It is now completed and Berry held their first football game in the stadium yesterday.  For me, the day started with the ribbon cutting and dedication.  If you were a football player family or a major donor/VIP, the events started even earlier in the day.  The president of the college, Dr. Stephen Briggs, made some opening remarks on the lawn in front of the stadium. 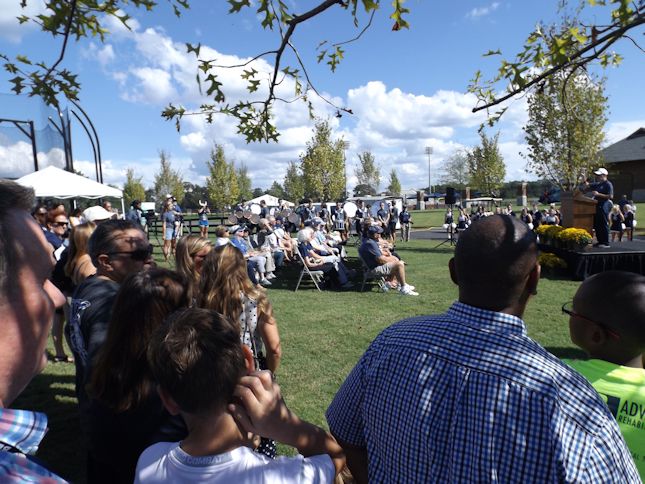 The weather was gorgeous and a large crowd attended.  Stay tuned for more information regarding the lady in the white hat in the bottom left corner of this photo. 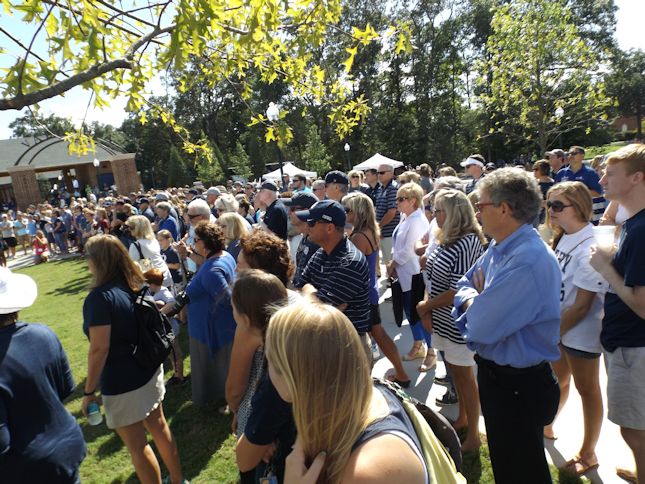 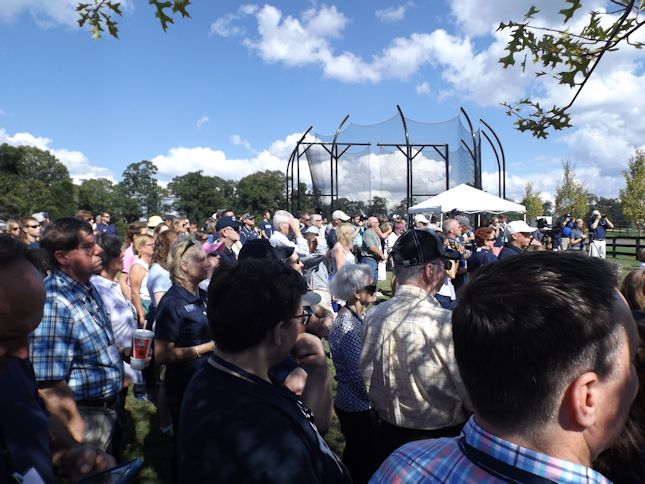 After Dr. Briggs spoke (below) there was a prayer of dedication for the stadium.  Although Berry is not a Christian college per se the stadium was dedicated to the Glory of God and to His service.  I guess I have been in the public schools too long because I found it beyond refreshing to have an institution proudly proclaiming and seeking God’s blessing in all that is done.

Now, back to the lady… The lady in the white hat from the corner of the picture as mentioned above was standing quite near us and we weren’t quite sure how to deal with the predicament at hand. 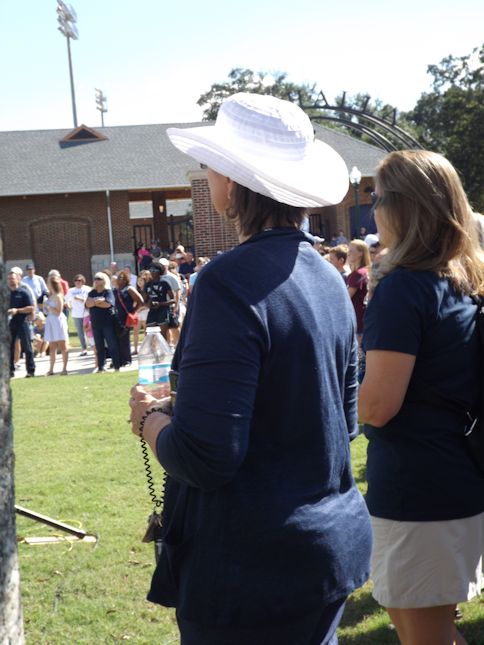 She had a little friend on her hat and I wasn’t sure whether to tell her or not.  If she was the squeamish type, I didn’t want her squealing in the middle of a ceremony, but I also didn’t want it crawling around on her face when I could have avoided the encounter. So, in the end I just took pictures of her and monitored the situation.  No harm done to either critter or alumnus. 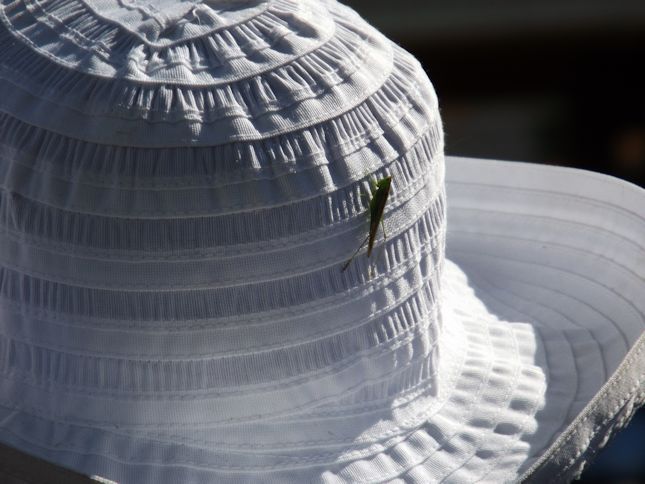 Next on the podium was Mr. Steve Cage.  He made the most sizable donation for the stadium.  Previously, he gifted the college with the Cage Athletic and Recreation Center. It is beautiful and well-used. 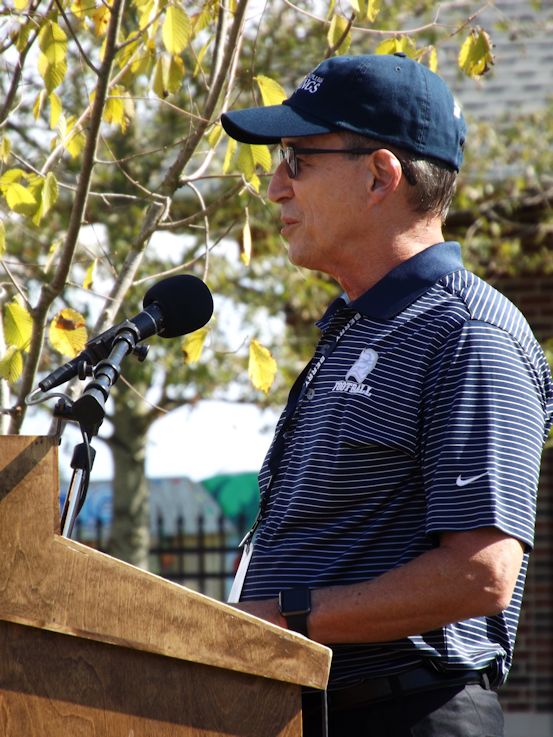 The ribbon cutting led the way for the Berry football team to come under the arch and into the stadium. 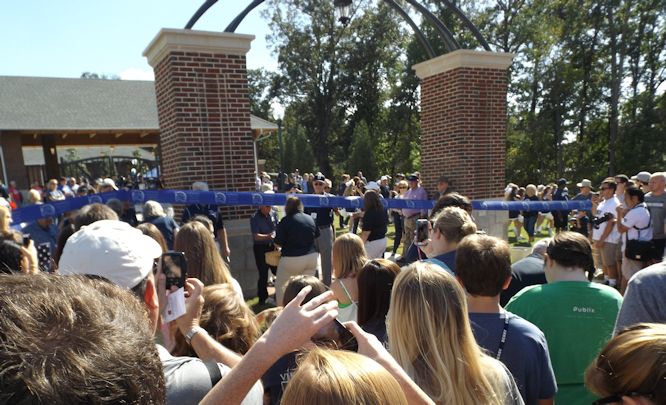 But first, Olivia and Victor the Viking.

The football captains are carrying their new viking battle-axe.  It was huge. 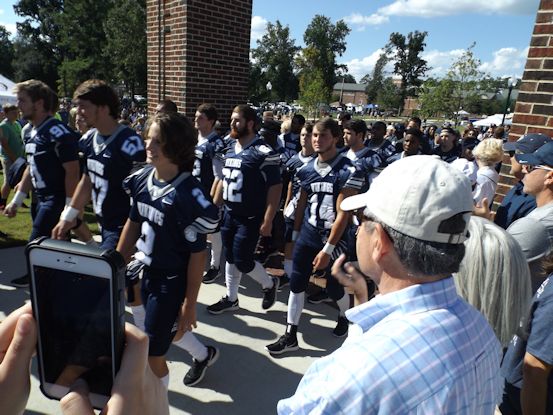 Berry is so magical it even uses giant candy corn as parking cones.

There is a designated student tailgating area in addition to the parent and alumni/VIP areas.

I love the side flaps on the stadium.  The pennant flags flying over the stadium represent the different teams in their division.

My favorite picture of the day!  Olivia is sporting her Berry Viking face paint.

The team is warming up and getting motivated in hopes of winning their first game in the new stadium. 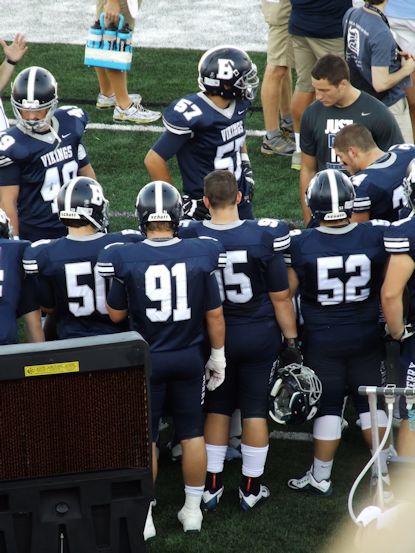 Taking a break in the action took me to the bathrooms.  Even they are nice!!! This was the ceiling of the women’s bathroom.  I’m taking the photo from the stall.  I didn’t think people would want me taking pictures of them coming in…or going out…or going…

Then, treats from a tailgate.  Cute and tasty.  Berry often serves these chess squares at other events I’ve been to as a parent.  I’m starting these events all over again with Davis as he makes college visits, too. 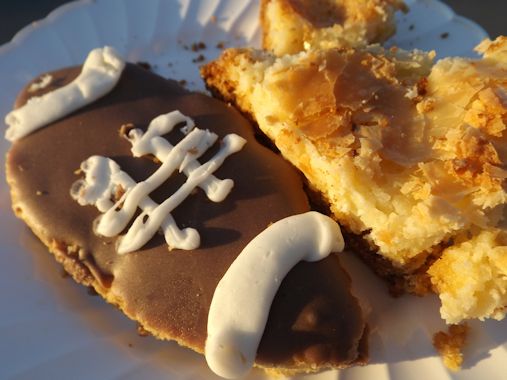 Olivia’s boyfriend Alec is right there in the middle. 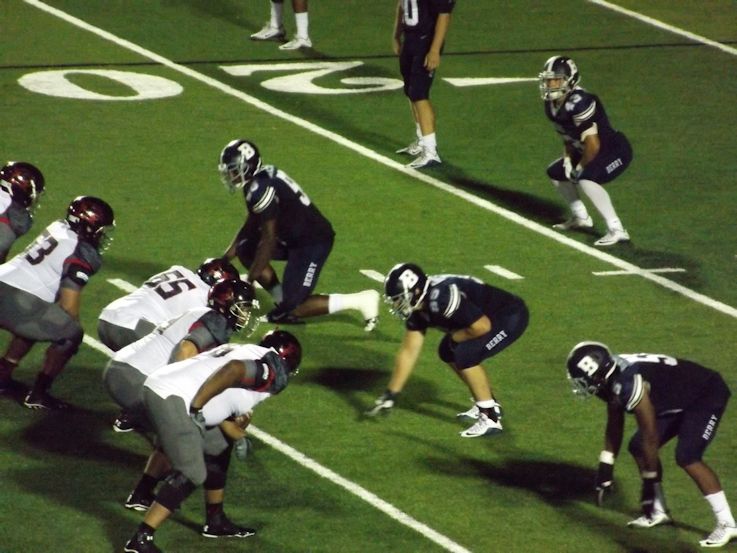 And now you see Alec again, #95 coming off of the field. He played an AMAZING game and had many significant tackles and a fumble recovery.  Huge game for him. 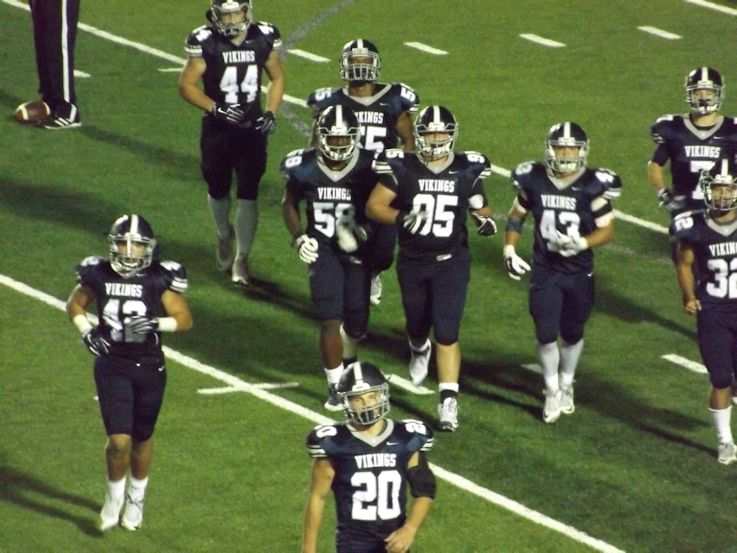 The 4th quarter ended with a tied score and went into overtime.  LaGrange College was stopped on the 1 yard line in their overtime scoring attempt and then their field goal was no good.  Berry took their overtime yardage but couldn’t make a touchdown either BUT was successful in their field goal.  I ‘m pretty sure this next picture shows the football aloft for the win however, it might be a light of a passing car.  🙂  See the dot to the left of the uprights? I’m pretty sure that’s the football. 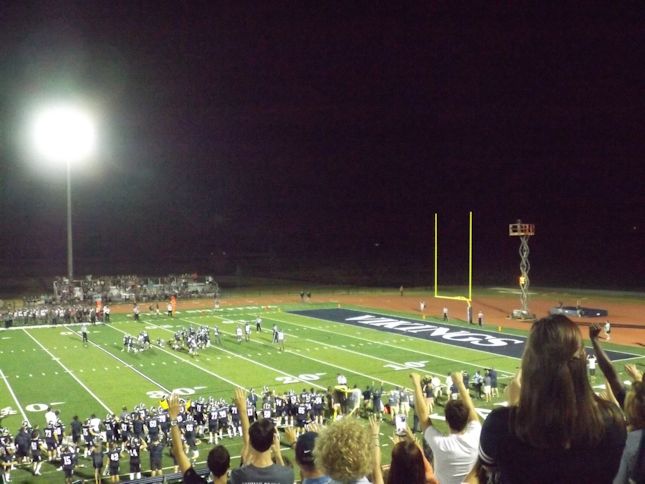 The team and cheerleaders led the crowd in the Alma mater after the game and then fireworks! 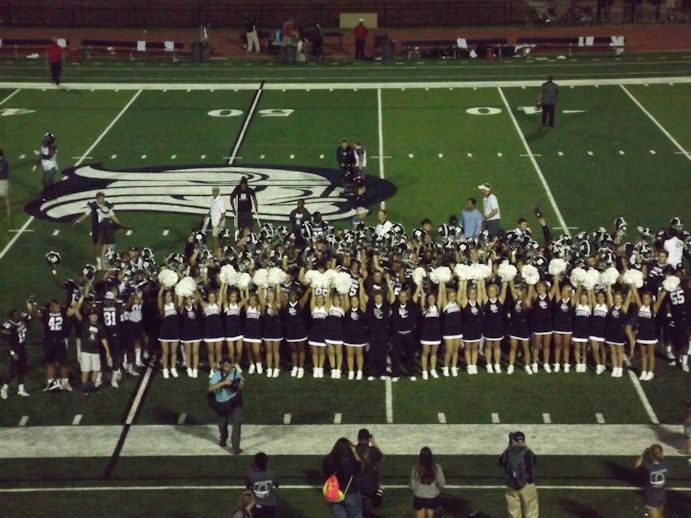 Finally, we got to the field to congratulate Alec. 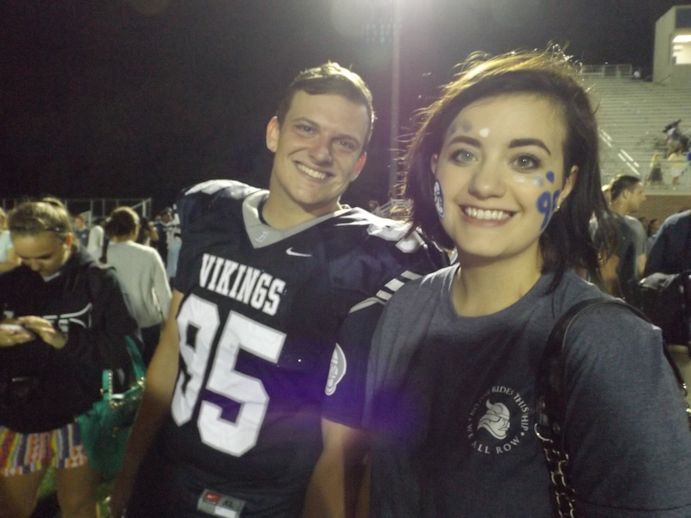 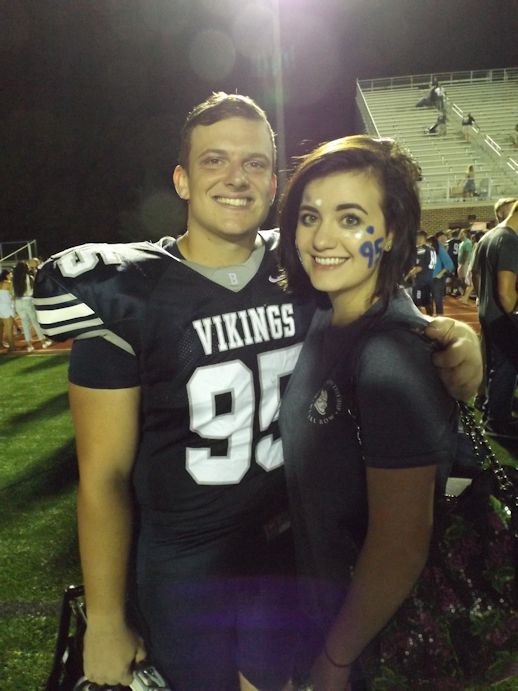 Olivia took a selfie of us. 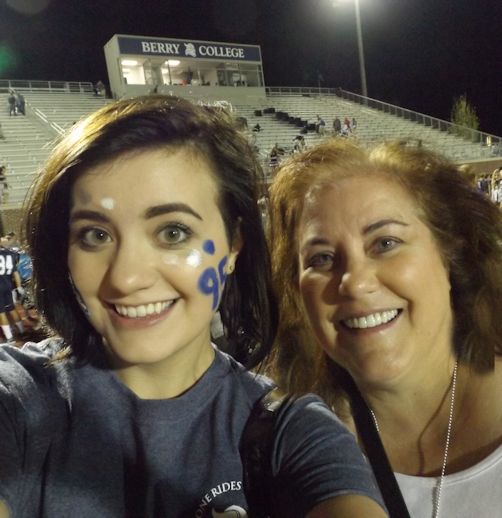 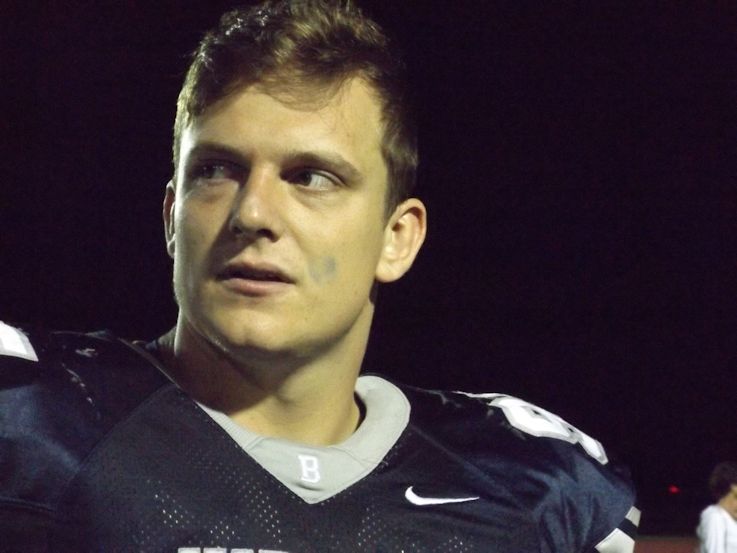 Alec and Olivia are very patient with my endless photographs. 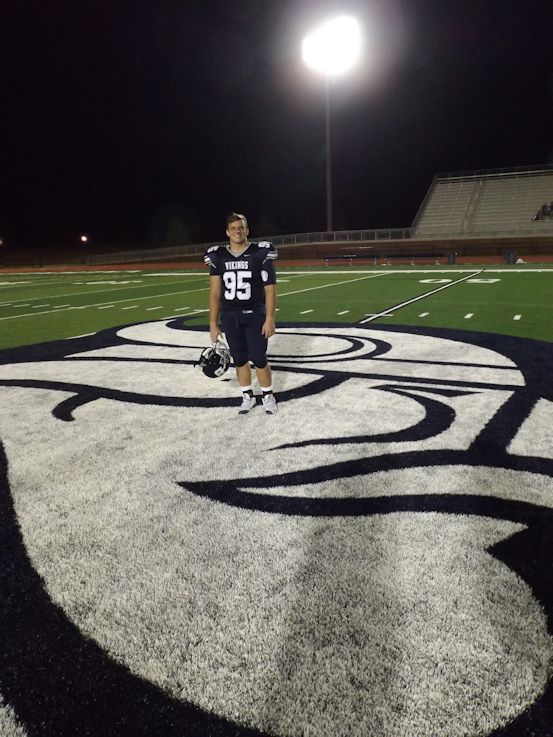 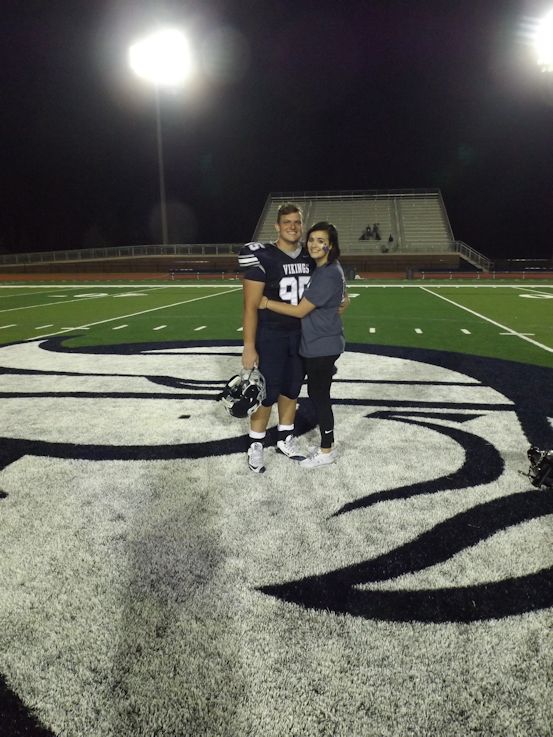 Great game! Congratulations to the team in a well-deserved victory.